*** Translate this blog into your language! ***

TRANSLATION INSTRUCTIONS: Please use the translation feature on this blog to translate this entire site into your choice of 56 different languages. Then copy and paste this entire page (or parts desired) into another document on your computer. Then you will be able to save it and/or print it for future use.

INSTRUCTIONS: How To Translate Downloadable Documents, Books And Booklets, On This Blog Into 90 Languages
https://maryrefugeofholylove.com/about/how-to-translate-downloadable-documents-books-and-booklets-on-this-blog-into-90-languages/

Click below for a free downloadable and printable PDF, ODT, and WordDoc copy (23 pages) of this webpage: 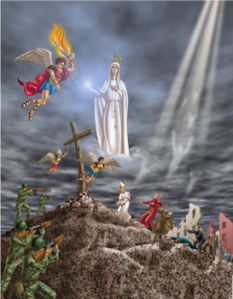 THE COMPLETE “SECRET” OF FATIMA

First and Second Part of the “Secret”

… This will entail my speaking about the secret, and thus answering the first question.

What is the secret? It seems to me that I can reveal it, since I already have permission from Heaven to do so. God’s representatives on earth have authorized me to do this several times and in various letters, one of which, I believe, is in your keeping. This letter is from Father José Bernardo Gonçalves, and in it he advises me to write to the Holy Father, suggesting, among other things, that I should reveal the secret. I did say something about it. But in order not to make my letter too long, since I was told to keep it short, I confined myself to the essentials, leaving it to God to provide another more favourable opportunity.

In my second account I have already described in detail the doubt which tormented me from 13 June until 13 July, and how it disappeared completely during the Apparition on that day.

Well, the secret is made up of three distinct parts, two of which I am now going to reveal.

The first part is the vision of hell.

Our Lady showed us a great sea of fire which seemed to be under the earth. Plunged in this fire were demons and souls in human form, like transparent burning embers, all blackened or burnished bronze, floating about in the conflagration, now raised into the air by the flames that issued from within themselves together with great clouds of smoke, now falling back on every side like sparks in a huge fire, without weight or equilibrium, and amid shrieks and groans of pain and despair, which horrified us and made us tremble with fear. The demons could be distinguished by their terrifying and repulsive likeness to frightful and unknown animals, all black and transparent. This vision lasted but an instant. How can we ever be grateful enough to our kind heavenly Mother, who had already prepared us by promising, in the first Apparition, to take us to heaven. Otherwise, I think we would have died of fear and terror.

We then looked up at Our Lady, who said to us so kindly and so sadly:

“You have seen hell where the souls of poor sinners go. To save them, God wishes to establish in the world devotion to my Immaculate Heart. If what I say to you is done, many souls will be saved and there will be peace. The war is going to end: but if people do not cease offending God, a worse one will break out during the Pontificate of Pius XI. When you see a night illumined by an unknown light, know that this is the great sign given you by God that he is about to punish the world for its crimes, by means of war, famine, and persecutions of the Church and of the Holy Father. To prevent this, I shall come to ask for the consecration of Russia to my Immaculate Heart, and the Communion of reparation on the First Saturdays. If my requests are heeded, Russia will be converted, and there will be peace; if not, she will spread her errors throughout the world, causing wars and persecutions of the Church. The good will be martyred; the Holy Father will have much to suffer; various nations will be annihilated. In the end, my Immaculate Heart will triumph. The Holy Father will consecrate Russia to me, and she shall be converted, and a period of peace will be granted to the world”.

Third Part of The “Secret” Revealed by the Vatican in 2000

The third part of the secret revealed at the Cova da Iria-Fatima, on 13 July 1917.

I write in obedience to you, my God, who command me to do so through his Excellency the Bishop of Leiria and through your Most Holy Mother and mine.

After the two parts which I have already explained, at the left of Our Lady and a little above, we saw an Angel with a flaming sword in his left hand; flashing, it gave out flames that looked as though they would set the world on fire; but they died out in contact with the splendour that Our Lady radiated towards him from her right hand: pointing to the earth with his right hand, the Angel cried out in a loud voice: ‘Penance, Penance, Penance!’. And we saw in an immense light that is God: ‘something similar to how people appear in a mirror when they pass in front of it’ a Bishop dressed in White ‘we had the impression that it was the Holy Father’. Other Bishops, Priests, men and women Religious going up a steep mountain, at the top of which there was a big Cross of rough-hewn trunks as of a cork-tree with the bark; before reaching there the Holy Father passed through a big city half in ruins and half trembling with halting step, afflicted with pain and sorrow, he prayed for the souls of the corpses he met on his way; having reached the top of the mountain, on his knees at the foot of the big Cross he was killed by a group of soldiers who fired bullets and arrows at him, and in the same way there died one after another the other Bishops, Priests, men and women Religious, and various lay people of different ranks and positions. Beneath the two arms of the Cross there were two Angels each with a crystal aspersorium in his hand, in which they gathered up the blood of the Martyrs and with it sprinkled the souls that were making their way to God.

(2014): An official publication of the Convent of Coimbra, where Sister Lucia dos Santos, the last visionary, lived and died (in 2005). It is a new book entitled “Un caminho sob o olhar de Maria” (“A Path Under the Gaze of Mary”) and it is a biography of Sister Lucy, written by her fellow sisters with precious unpublished documents from the same visionary.

At around 4 p.m. on January 3, 1944, in the chapel of the convent, before the Tabernacle, Lucia asked Jesus to make known His will: “I then felt a friendly hand, maternal and affectionate, touch my shoulder.”

And the Mother of God said to her: “Be at peace, and write what I have commanded you, but not, however, that which has been given to you to understand its meaning,” intending to allude to the meaning of the vision which the Virgin herself had revealed.

Immediately afterward, said Sister Lucia, “I felt my spirit inundated by a mystery of light that is God and in Him I saw and heard: the point of a lance like a flame that is detached, touches the axis of the earth, and it trembles: mountains, cities, towns and villages with their inhabitants are buried. The sea, the rivers, the clouds, exceed their boundaries, inundating and dragging with them, in a vortex, houses and people in a number that cannot be counted. It is the purification of the world from the sin in which it is immersed. Hatred, ambition, provoke the destructive war. After I felt my racing heart, in my spirit a soft voice said: ‘In time, one faith, one baptism, one Church, Holy, Catholic, Apostolic. In eternity, Heaven!’ This word ‘Heaven’ filled my heart with peace and happiness in such a way that, almost without being aware of it, I kept repeating to myself for a long time: Heaven, Heaven.”

In May of 1994 – 77 years after Our Lady first appeared to the three children at Fatima, Portugal – a French priest by the name of Raymond Arnette was listening to a CD entitled “Mysterium Fidei,” with French lyrics and sung by French choirs. As he was listening devoutly, suddenly the music faded into the background and a clear voice, which was perceived quite normally and not as an interior inspiration, said: “L’eglise saignera de toutes ses plaies”, that is, “The Church will bleed from all her wounds.”

Then, there followed this text:

“There will be a wicked council planned and prepared that will change the countenance of the Church. Many will lose the Faith; confusion will reign everywhere. The sheep will search for their shepherds in vain.”

“A schism will tear apart the holy tunic of My Son. This will be the end of times, foretold in the Holy Scriptures and recalled to memory by Me in many places. The abomination of abominations will reach its peak and it will bring the chastisement announced at La Salette. My Son’s arm, which I will not be able to hold back anymore, will punish this poor world, which must expiate its crimes.”

“One will only speak about wars and revolutions. The elements of nature will be unchained and will cause anguish even among the best (the most courageous). The Church will bleed from all Her wounds. Happy are they who will persevere and search for refuge in My Heart, because in the end My Immaculate Heart will triumph.”

After this message, Fr. Arnette only heard one more sentence: “This is the Third Secret of Fatima.”

The Secret Of Fatima (First, Second, And Third Parts)
https://maryourlady.com/our-lady-of-fatima/the-secret-of-fatima-first-second-and-third-parts/

The True Third Secret Of Fatima, The Prophecies Of Garabandal And The End Times
https://maryrefugeofholylove.com/our-lady-mary-queen-of-heaven/the-true-third-secret-of-fatima-the-prophecies-of-garabandal-and-the-end-times/

Our Lady Of La Salette – The Official Story And The Secret Of Melanie And Maximin
https://maryrefugeofholylove.com/our-lady-mary-queen-of-heaven/our-lady-of-la-salette-the-story-and-the-secret-of-melanie-and-maximin/