Click below for a free downloadable PDF, ODT, and WordDoc copy (7 pages) of this special commentary: 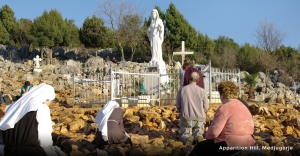 Only God The Father Knows The Day Of The Warning  https://maryrefugeofholylove.com/the-warning-illumination-of-conscience/only-god-the-father-knows-the-day-of-the-warning/

As I have shared in prior writings, in January 2017, amidst much spiritual warfare, St. Gabriel the Archangel revealed to me several related insights into the Secrets of Our Lady of Medjugorje and Our Lady of Garabandal. In particular, these things were told to me by St. Gabriel:

Now, there are a few important aspects about my private encounter with St. Gabriel that I want people to truly know and understand:

And so, the reason why I was prompted to write this commentary today, is because of a recent posting found on the Medjugorje news website, Mystic Post. The article is about what limited information has been revealed by the Medjugorje visionaries about the First Secret, which lends support to my claim that the First Secret of Medjugorje is NOT the Illumination of Conscience (The Warning of Garabandal), as well as the sequence of the unveiling of all the Secrets of Garabandal and Medjugorje. Here is a link to the article:

Vicka: “The first secret has to do with the church at Medjugorje… Mirjana: “The first secret is not a pleasant thing and will make you look at things in a completely new way.” https://mysticpost.com/2018/07/vicka-the-first-secret-has-to-do-with-the-church-at-medjugorje-mirjana-the-first-secret-is-not-a-pleasant-thing-and-will-make-you-look-at-things-in-a-completely-new-way/

Both of these statements by Vicka and Mirjana also lend support to my recent commentaries about the “Hidden Plan” of God and what events will need to transpire to avoid the Great Chastisement and the Great Tribulation under the reign of the antichrist. The fact is, the Warning and Great Miracle of Garabandal, as well as the unveiling of the contents of the Tenth Secret of Medjugorje by the visionaries in the aftermath of the Warning, is meant to be a great catalyst for the Popes, the Bishops, and the Catholic Church, to consecrate Russia to the Immaculate Heart of Mary as requested at Fatima. It is only by way of the consecration of Russia can the worldwide nuclear war be averted and other chains of events that give rise to the reign of the antichrist and collapse of the visible Catholic Church.

Also, the fact that Mirjana shares that once the contents and dates of the Ten Secrets of Medjugorje begin to be fulfilled, it will be too late for many people, is true. In heavenly messages found in Locutions To The World, Our Lady has indicated that some of the Ten Secrets involve nuclear catastrophes, etc. Our Lady has also stated in the Locutions, that the tragedy of the annihilation of nations, is that such a world war catches the lives of so many people off-guard without adequate preparation for the moment of death and final reconciliation with God. And as indicated in heavenly messages at Holy Love Ministries (http://www.holylove.org), at least 85% of the current world population is in a state of disgrace (mortal sin) before God. So, potentially, that results in a huge majority of people dying by nuclear weapons ending up as lost souls in hell.

Also, the fact that when the contents and dates of the Ten Secrets of Medjugorje begin to be fulfilled will be too late for many people is also true, because after the Miracle of Garabandal happens, mankind will be subject to the Divine Justice of God for not repenting for its sins as revealed during the Illumination of Conscience (The Warning). As I have written in prior commentaries, supported by different heavenly messages, mankind will only be given a limited time to repent after the Warning and Miracle of Garabandal takes place, and, collectively, return to God and living fully according to His Ten Commandments. If God sees no worldwide repentance with massive conversions back to God, than the antichrist will be permitted his reign and the Great Tribulation will unfold as prophesied in Holy Scripture (Book of Revelation and other prophetic books). So, truly, when the Ten Secrets of Medjugorje start to be fulfilled, the contents and dates will be mainly provided to prepare the faithful left in the world to endure the catastrophes, as the rest of the world will be lost to the mark of the beast and the antichrist, etc. So, any mitigation of the Ten Secrets of Medjugorje has to take place in the immediate aftermath of the Warning and Great Miracle of Garabandal by mankind, because the further away from the occurrence of the Warning without worldwide repentance, the more subject mankind will be to God’s Holy Wrath. Because, truly, the Great Warning will subject all of mankind to the highest level of accountability before God due to its nature as such a significant act of grace by God—at the same scale of accountability that all the angels were given by God at the dawn of Creation when one-third of the angels fell into disgrace and became lost to hell.

Finally, in concluding thoughts, I want to say that the fact that the First Secret of Medjugorje somehow involves the church at Medjugorje is not surprising to me, as in the past, Mirjana, has described the world as being desolate at the time of the First Secret as “it is the upheaval of a region of the world.” As revealed to other chosen messengers of Heaven, the antichrist presently lives in Europe and after the Warning of Garabandal happens, he will be trying to exert his power to bring about his reign in the European Union (the new Babylon) with his seat of power in Rome under the Catholic Church. So, it is very easy to conclude that after the Great Warning, that the antichrist, and other minions of satan, such as the elite globalists/masonic forces, and Islamic terrorists, will be seeking the ultimate demise of the site of Medjugorje, because of what Medjugorje will come to represent to the world—the source of reconciliation between mankind and God—after the Warning happens. These are personal thoughts of mine, as I believe the First Secret of Medjugorje is a combination of events—both man-made and natural phenomena, although I do not base this conjecture on any specific heavenly revelation.

And so, those are my thoughts for today that I desire to share with followers of MaryRefugeOfHolyLove. Thank you for your continuing prayers for me and the success of this blog. I love you all very much.

REFERENCE (Commentaries By a soul):

Understanding the Hidden Plan of God and the Purpose of Heavenly Messages https://maryrefugeofholylove.com/2018/05/14/special-commentary-understanding-the-hidden-plan-of-god-and-the-purpose-of-heavenly-messages-by-a-soul/

Understanding the Hidden Plan of God for Avoiding the Great Chastisement https://maryrefugeofholylove.com/2018/05/12/special-commentary-understanding-the-hidden-plan-of-god-for-avoiding-the-great-chastisement-by-a-soul/

Understanding the Impact of the Great Warning and Great Miracle of Garabandal In Avoiding the Great Chastisement https://maryrefugeofholylove.com/2018/04/02/understanding-the-impact-of-the-great-warning-and-great-miracle-of-garabandal-in-avoiding-the-great-chastisement/

RELATED COMMENTARIES (By a soul):

The Great Warning, Islam, and the Divine Plan https://maryrefugeofholylove.com/2017/08/12/special-commentary-the-great-warning-islam-and-the-divine-plan-by-a-soul/