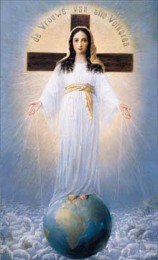 Our Lady of All Nations

I come to you today as Your Lady of All Nations, specifically to request the prayers of all of God’s children in all nations of the world to pray powerfully for a prayerful unification for the people of Russia and the people of the United States of America through their influence on their leaders to bring about world peace and justice through the peaceful resolution of conflicts between these two powerful countries.

It is God’s will that these two countries align themselves against the new world order elitists who are hell-bent on destroying God’s plan for humanity through their control of the world’s economies and banking institutions.

Ever since my appearances to the children of Fatima, I have requested of all of God’s children and of the leaders of my Son’s Church that there needs to be a Consecration of Russia to my Immaculate Heart.

Now we are in the End Times when the Consecration of Russia to My Immaculate Heart must be completed in conjunction with these two great powers, the United States and Russia, coming to peaceful terms that will go a long way in influencing the world to pursue world peace in opposition to the global elitists, the minions of satan, who have been covertly and secretly planning a global war that will affect all nations, if satan and his minions are successful in their plans.

Now for the first time in modern times, the conditions are in place for the leaders of these two great nations to meet to achieve these leaders’ mutual goals of securing peace for the world and for all nations. The new world order minions are hell-bent on preventing a peaceful accord between Russia and the United States for it conflicts with their plans to create further conflicts between these two nations to achieve their goals through a third world war that will result in incalculable loss of life and misery for all peoples of the world.

In this regard, the Pontiff in Rome must prayerfully reassess the allegiance that he has formed with the new world order elitists, for it is their plans that are in great conflict with the Church of My Son.

The future of world peace is in the hands of the Redeemer’s powerful prayerful warriors to bring about a peace agreement between Russia and the United States and a defeat of the new world order that is the work of satan.

The people of the world must also pray for China and the people of China for the direction that China is now taking makes China the greatest threat to world peace, just as I had predicted to many of God’s children who listen to my messages to bring about world peace.

So the future is now clear for those of you who are the prayerful warriors of My Son, Jesus Christ.

You must pray powerfully that the Pontiff in Rome receives the discernment to understand what it is that God the Father wants to bring about world peace and eventually a New Heaven and A New Earth.

The people of the world must also pray powerfully that the leaders of Russia and the United States meet peacefully and come to an agreement that will usher in a world peace and defeat the minions of satan and their new world order.

God the Father – “While my people argue over the validity of the consecration of Russia, many souls are going to hell – Do not allow yourself to be caught in Satan’s trap” https://maryourlady.com/2018/04/16/god-the-father-while-my-people-argue-over-the-validity-of-the-consecration-of-russia-many-souls-are-going-to-hell-do-not-allow-yourself-to-be-caught-in-satans-trap/

Our Lady of Fatima – Blessed Virgin Mary – “My dear children, you must take this Motherly warning to heart” https://maryourlady.com/2018/05/14/our-lady-of-fatima-blessed-virgin-mary-my-dear-children-you-must-take-this-motherly-warning-to-heart/

God the Father – “The temporary peace which was afforded the world after the Fatima apparitions did not last” https://maryourlady.com/2018/06/30/god-the-father-the-temporary-peace-which-was-afforded-the-world-after-the-fatima-apparitions-did-not-last/