MESSAGE OF ST MICHAEL THE ARCHANGEL
TO LUZ DE MARIA
MAY 18, 2020 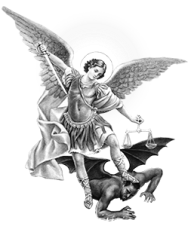 BE ONE IN THE UNITY AND FRATERNITY OF THE CHILDREN OF GOD. PEOPLE OF GOD, YOU MUST BE HOLY AS CHRIST IS HOLY.

Blessing rests upon the children of God and the children of Our Queen and Mother, although each human creature must work and act in the likeness of Our Lord and King Jesus Christ to merit that blessing.

Divine Mercy is poured out on all humanity, although It flourishes in human beings who make an effort, who strive for conversion, who repent and make reparation for offenses committed against the Most Holy Trinity, against Our Queen and Mother and against their fellow men, so that they might be worthy of Divine Mercy (cf. Mk 11:25; Ps 32:5).

At this time in which confusion is growing vertiginously within the Mystical Body of our King, I must call you to OBEDIENCE, which is expressed in the Law of God and cannot be altered (cf. Ps 19:8-10).

The People of God must be strengthened in Faith to face what is coming for the Church and therefore the Mystical Body of Our King.

Today’s human being does not know of suffering, so therefore does not acknowledge it as an element of expiation, and when suffering, blames God.

DIRECTIONLESS HUMANITY HAS DESECRATED THE MYSTERY OF DIVINE LOVE, GRANTED BY GOD TO MAN IN THE MOST BLESSED SACRAMENT, BEFORE WHICH WE THE HEAVENLY CHOIRS HAVE WEPT TEARS OF PAIN OVER SUCH A GRAVE ACT BY MAN.

Such acts give strength to the Devil and exalt him, so that the Devil forcefully pounces upon the children of Our Queen and Mother, scourging them again and again, now with disease, then increasing that same scourge of disease in order to make men despair, until, suffering again and again, the human being feels incapable of surviving amidst constant anxiety.

Be aware of the crucial situation in which you find yourselves: this will increasingly be the case, going from one level to another, from one institution to another, encompassing society in all its work and actions, and above all in man’s spirit, in order to undermine his Faith in God.

PEOPLE OF GOD, THE BATTLE IS GOING FROM BEING A BATTLE TO BECOMING THE EXPECTED AND FEARED WORLD WAR. (*)

Ideologies are fighting for souls: discern, children of God, discern! Do not extinguish the Faith, stay awake and vigilant, because wolves in sheep’s clothing (cf. Mt 7:15) abound at this very moment.

YOU HAVE TO DISCERN IN ORDER NOT TO GIVE PEARLS TO SWINE.

ENOUGH NOW OF HUMAN FOOLISHNESS, OF SPIRITUAL BLINDNESS THAT ONLY LEADS TO THE BETRAYAL AND PERSECUTION OF THE PEOPLE OF GOD IN ADVANCE.

It is necessary for you to bear in mind what happened to those in the history of salvation who disobeyed God and rebelled against Him. THERE WILL BE NO EXEMPTION FOR THIS GENERATION WITH ITS HERESIES AND PROFANATIONS; YOU MUST HUMBLE YOURSELVES AND ACKNOWLEDGE THAT YOU ARE SINNERS BEFORE GOD.

At the moment, those who long for conversion and are prepared for it will find a way that is freer for conversion in the midst of the silence prevalent within humanity. Force in disguise has been used on humanity in order to silence it. Force, yes, without man perceiving it! Humanity is being held captive, without feeling deprived of its freedom.

THE NEW RELIGION IS ENTERING WITHOUT THE PEOPLE OF GOD SEEING IT AS IT IS. A RELIGION WITHOUT SPIRITUAL FOOD WHERE THE PEOPLE OF GOD LIVE AS IF THEY WERE PRACTISING ANOTHER RELIGION. They are paving the way for the “SINGLE RELIGION”, robbing our King and Lord Jesus Christ of His Scepter.

Human madness is surfacing: with the economy declining, they will subject humanity to THE SINGLE CURRENCY.

WITH NEITHER MORALITY NOR TRUTH… WHAT AWAITS MAN?

People of God, the signs and signals are visible: you choose.

The plates making up the Earth’s crust are moving in an unusual way, causing serious earthquakes of great magnitude.

The water of the seas is rising: pay attention, People of God!

Communism has entered countries in the Americas and lamentation has arrived, awakening at this time.

BEND YOUR KNEES, “PRAY IN SEASON AND OUT OF SEASON”, DO NOT SUCCUMB, KEEP YOUR FAITH ALIVE AND VIBRANT; GOD’S ASSISTANCE DESCENDS FROM HEAVEN.

He who has not believed should believe…

He who has not been walking should walk…

He who has stopped on the way should continue with strength…

This is the time to take the Hand held out in front of each one of you: the Hand of the Queen and Mother of all creation.

WITH FAITH, HOPE, WITHOUT FALTERING, WITH PRAYER AND THE PRACTICE OF PRAYER, WITH DEEDS, WITH FORGIVENESS AND ASSURANCE.