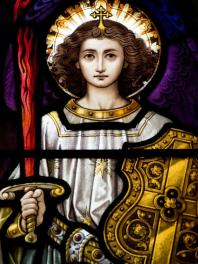 As your protector, I ask you to stand with me and call out to me as your protector with the Prayer to St Michael the Archangel: “St Michael the Archangel, defend us in battle. Be our protection against the wickedness and snares of the devil. May God rebuke him we humbly pray, and do thou, O Prince of the Heavenly Host, by the power of God, cast into hell satan and all the evil spirits who prowl about the world seeking the ruin of souls. Amen.”

Repeat this Powerful Prayer solemnly as you meditate and call for the Sword’s Shield of Protection.

You will know that you are successful in your prayers when you feel the Archangel’s Sword pierce through your body, mind, spirit, and soul. You will feel the power of the Holy Spirit protecting and guiding you as you rise up and defend Your Father in Heaven; Your Redeemer, Jesus Christ; Your Heavenly Mother; and all the Angels and Saints who are here now in these End Times to assure that the evil one and his minions are defeated finally and sent to the fires of hell.

Do not be discouraged, if at first, you do not feel the Power of the Holy Spirit pour through you. Perhaps you need to pray the prayer repeatedly and to fast and sacrifice to be bestowed with the blessing of the Holy Spirit through the Steely Sword of the Powerful Archangels so that you can become disciplined as a Warrior for the Father, for now is the time that you are being called into the Final Battle.

As Powerful Prayer Warriors, many of you will need the additional strength of the Sword’s Shield for many of you are being called to engage in the secular battle against the evil one and his minions. Many of you will be called even to bear arms against the sinister forces among you, for now is the time when defending yourself, your family members, and your friends becomes of paramount importance, for the evil one is waging his last attempt to destroy the Father’s children.

Be aware now of what is taking place in your secular world. The normal life that you had just months before is now a ‘new normal’ as dictated by satan and the new world order forces of evil who are attempting to further enslave you. Now it must be obvious to many of you who the enemy is. The enemy is the evil, and you, the Powerful Prayer Warriors, represent the good. The enemy is satan and all of his disguises – Baal, Moloch, Lucifer, and others.

Satan’s minions here on Earth have already become militarized against their brothers and sisters, the good people of humanity. Yet, they are so dark and filled with hatred by he who has become their master – satan – that they are incapable of seeing the Light, as they rain down violence and chaos while they burn, loot, pillage, and attack their own brothers and sisters. For many of them, this will all end in tragedy for their souls.

Satan and his followers are now hell-bent to destroy the nationality and sovereignty of the United States of America. Satan is using his political minions and global world leaders to achieve this goal. Satan has been sabotaging your duly elected government through his political minions, and there is no stopping them now.

They will continue to assault, burn, loot, and riot to get their way in the end. They will sabotage your soon-to-be elections to get their way because the continuance of the program initiated to save your country will defeat them finally, and the evil one knows it.

So in this Final Battle of the End Times, you will be called upon to actively support your leaders who have only the best interests of your nation and states in mind. The Father in Heaven is calling upon you now more than ever to defeat the dark secret and occult forces that have been manipulating and controlling God’s children for many generations. But now you are in the final battle, and you have the assistance of the Heavenly Realms to defeat the new world order people finally and to usher in an Era of Peace – a New Heaven and a New Earth.

Therefore, it is incumbent upon you to not only bear arms against your enemies, but to reach out to your loved ones, family members, friends, and neighbors in a last attempt to get them to see the Light of the Father in Heaven.

I assure you that if you pray and meditate for the intercession of St Michael the Archangel that I will enter more fully into your life and assist you in your mission. You will then be so powerful and full of the strength of the Holy Spirit that you will be better able to assist your brothers and sisters to step into the Light of the Father in Heaven and to reject the darkness of satan.