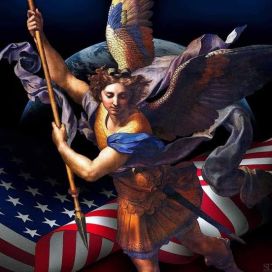 A Message to the People of the United States of America

I come to you today as Michael the Archangel and as Spiritual Protector of the United States of America.

Today, in the United States, you are in a deep spiritual crisis that was fomented over a century ago when the demonic forces of the globalist occult secret societies established a firm grip on your nation. Since then, you have been in a constant battle of Good versus Evil on your earthly plane, and I have been waging a battle against the dark forces of the evil one on the spiritual plane.

The machinations of your elections by the evil one should send a loud and clear signal to all of you that indeed this is the Final Battle to be waged against the evil one. Many of you have been valiantly answering the call to rise up against the forces of evil of the new world order. However, it appears that your intentions and goals have fallen short, and the evil one intends to fully take advantage of the weakness that he sees in your country now.

Why has this happened? Many of your brothers and sisters – who only appear to be in the majority now – are the Sheeple who exist through their entire lives glazed over by the evil one to the point that they are incapable of critical thinking and discernment to recognize the Good from the Evil in your world.

Nowhere is this more obvious than in the illusion of choice that has been created that has particularly fooled many of your women into a belief that they become empowered by exercising their choice of death over life of God’s children who grow within their wombs only to be eventually sacrificed at the altar of abortion.

Your country has become so satanic now that the taking of a child’s life is even celebrated publicly, just as it had been in the ancient civilizations that were eventually destroyed because they turned away from your Father in Heaven and Your Lord and Saviour, Jesus Christ.

So now, what do you think will be the future of your country as the forces of satan assume even more power and control over your nation and your people? Do not doubt that you as a nation are in greater danger now because the evil one is closer to being in full control through his demonic minions who are leaders from the darkness.

Understand that it is your responsibility to use your gift of critical thought and discernment to continue to identify the evil among you and to further identify the evil leaders who are responsible for a culture of death in your nation, especially now that they believe they are about to rise up and be fully in control. Indeed, darkness is the spiritual weather-front that is about to descend upon your nation.

As Powerful Prayer Warriors, you continue to have the responsibility to put up the good fight against the evil regardless of your political affairs and pray, pray, pray to overcome the evil in your secular world.

The Father in Heaven never promised you material or secular success against the evil one. You were never promised a president or pope, or a priest or a prophet from among you who would convert the world into a New Heaven and a New Earth.

Ultimately, the Father in Heaven and His Son the Redeemer have always promised you a New Heaven and a New Earth to be preceded by a period of darkness. You have been promised an eternal paradise if you remain in the fold of the Father in Heaven; His Son, Jesus Christ, the Redeemer of the world; and your Heavenly Mother who will crush the head of the serpent under her foot during the End Times period in which you are now living.

You must remain strong and vigilant in your secular and material affairs and in your support of the leaders that you discern are – like you – doing God’s work. But ultimately, the promise of the Father in Heaven will come from the spiritual journey on which all of the brothers and sisters will soon embark.

Continue to fight the good fight in your secular world, but more importantly prepare for the Second Coming of the Lord and Saviour Jesus Christ, the Redeemer of the world.

You have been promised a return of the Father’s Son, Jesus Christ, to draw a line in the sand across which satan and his minions shall not cross. That line in the sand is already set at a particular point in the timeline of humanity. The evil one knows it; and he knows that the end is near.

There will be a Great Shaking and a Great Transformation coming soon as promised by the Father in Heaven.

For this, you should be grateful and in knowing now that the evil one’s time is short!

Americans, if you were part of the fraudulent voting scheme, prepare yourself for Hell unless you report it to the authorities! Every person involved with the demonic-rats to steal the vote from President Trump, you will answer to Almighty God the Father! If you are a Catholic, and you voted for the party of abortionists, run to Sacramental Confession before the Warning, or you will die and go to Hell. You have been warned!