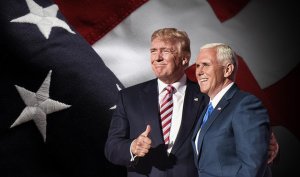 “I am the Eternal Now – Creator of all souls. Now you see, and perhaps better understand the reasons My Son’s Heart is so mournful. Unique to these times is the way the compromise of Truth and the abuse of authority has united to try to overthrow this government.”*

“If the light of Truth had been extinguished, this evil plan would have been a success. All that is being accomplished now to strengthen your nation is being discounted by evil forces within the politically ambitious. It is by Heaven’s grace and efforts Mr. Trump came to power. I urge your nation to support him and to unite behind him. I speak about politics, as this is not politics as usual. It is good against evil. Recognize the ways Satan is trying to come to power through politics – politics which has become a showdown of good against evil.”

Finally, be strong in the Lord and in the strength of His Might. Put on the whole armor of God, that you may be able to stand against the wiles of the devil. For we are not contending against flesh and blood, but against the principalities, against the powers, against the world rulers of this present darkness, against the spiritual hosts of wickedness in the heavenly places. Therefore take the whole armor of God, that you may be able to withstand in the evil day, and having done all, to stand. Stand therefore, having girded your loins with Truth, and having put on the breastplate of righteousness, and having shod your feet with the equipment of the gospel of peace; above all taking the shield of faith, with which you can quench all the flaming darts of the evil one. And take the helmet of salvation, and the sword of the Spirit, which is the Word of God.

Blessed Virgin Mary – “What a profound moment in history – this grace of Mr. Trump’s election (USA)!”

Locutions To The World

There is a leader whom I hold in my heart and whose ascendency to office I want to bring about. I have given him all the qualifications needed to lead the free world. I have advanced him according to my plan and he, himself, is willing to make the sacrifices needed to seek election.

I ask of him only one thing. He must protect human life, all human life, no matter how it is conceived. He must stand clear and firm that human life begins at the moment of conception.

Let him put his name to the Life At Conception Act. Let him not fear. This is the step I want him to take. If he commits himself to protect every unborn life, I will protect him in his bid for the highest office.

To all world leaders I say clearly that there can be no compromise in this matter. None of you are allowed to sacrifice the unborn for the sake of your political lives. God cannot bless America while America kills its unborn. This is the cause of your decline, a decline that will happen even more quickly if you do not change your laws.