NOTE (By a soul):
This is a live-streaming Christian conference that I will be attending online. Although it is not Catholic (so you need to use your best discernment), the Lord led me to these speakers (Steve Quayle, Russ Dizdar, Mike Adams) in this past year so I could understand the Battle of Armageddon better (which will be about an invasion of demonic aliens). If you attend, you also get access to last year’s conference which was about aliens and exotic technology. Also, for you to know, these Christians do not believe in a pre-tribulation rapture, so they have the perspective that everyone will undergo the Apocalypse on earth and they believe in the refuges. However, because they are not Catholic, they are not aware of the coming Great Warning (Illumination of Conscience) and Catholic prophecy and how it works–they have a faulty understanding about Marian apparitions like Fatima, etc.  Also, most use the King James Bible for interpretation of Sacred Scripture. But, I still believe the conference is worth it if you can afford the ticket.  God bless!

Commentary – Who are the Christian sources that I listen to about the End Times? – By a soul  https://maryrefugeofsouls.com/2020/03/27/commentary-who-are-the-christian-sources-that-i-listen-to-about-the-end-times-by-a-soul/ 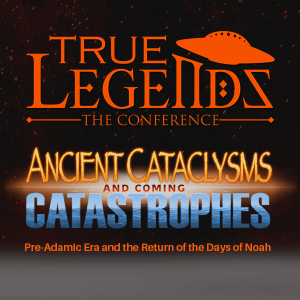 Please Note: Due to global events, this conference is now a Live Streaming-only event and has been moved up to May 2020.

Before Adam and Eve, before the Garden of Eden, before the Earth had become formless and void — did a vast and ancient civilization thrive in the time before time began? Many refer to this period of antiquity as simply the GAP THEORY: Mysterious eons taking place between Genesis chapter 1, verses 1 and 2.

Did Lucifer, during this indeterminate span, rule our world and galaxy before his infamous fall? Was a planet named Rahab destroyed as part of this cosmic and heavenly war? Was worship of that serpent of old and his eventual rebellion the reason God’s wrath wiped our planet clean before His new creation? And in the first era of man, what horrible events followed that could have led to the great deluge? Why would a loving God again destroy all life on Earth in a flood so terrible that nearly all early civilizations speak of it with reverence and dread? Could the very same series of events be taking place now, leading humanity into a “Return of the Days of Noah”?

Jesus Christ said in Matthew 24 that as the days of Noah were, so also shall the coming of the Son of man be: “For then shall be great tribulation, such as was not since the beginning of the world to this time, nor ever shall be.” Are the catastrophes foretold in the book of Revelation about to envelop our planet with a destructive force more powerful than anything before them? Most importantly, how can the remnant prepare for this coming darkness promise at the close of our age?

May 15-16, 2020, True Legends The Conference is gathering an unprecedented lineup of speakers to answer these questions and prepare God’s people for the climactic finale to the greatest story ever told. Steve Quayle, Mike Adams, Russ Dizdar, Gary Wayne, Michael Lake, Carl Teichrib, Celeste Solum, L.A. Marzulli, Bob Griswold, Derek Gilbert, and more will provide insight, expertise, and most all HOPE as we approach the End of Days.

Virtually join us for True Legends 4.0 and get prepared!

GARY WAYNE: In The Beginning Gen 1:1-2: What Was Will Be Again

CELESTE SOLUM: What is Your Worse Case Scenario?

MICHAEL LAKE: Cataclysms Before Time & the Deception of Time Cycles

CARL TEICHRIB: Game of Gods: The Temple of Man in the Age of Re-Enchantment

DEREK GILBERT: A Rip in the Fabric of Time: Chaos, Leviathan, & the Real War of the Worlds

Special Commentary – Why Must Mankind Undergo the Great Tribulation? – By a soul