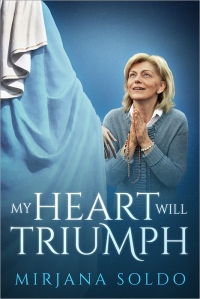 COMMENT (by a soul):
Mirjana Soldo, one of the six visionaries of Our Lady of Medjugorje, has written her autobiography, “My Heart Will Triumph,” which will release on August 15, 2016. Mirjana is the visionary who receives the 2nd of the Month messages for non-believers and is also the visionary who will reveal the Ten Secrets that will affect the entire world.

To promote the book, the first page of her memoir was released yesterday, which I am including in this blog post for people to read. I will be ordering the book and I intend to do a book review for those who might be interested in reading it.

If you would like to pre-order the book, it is available at this website, along with further information:

Finally, for those who are not familiar with Our Lady of Medjugorje, here is a good summary piece of the Marian apparitions: http://www.medjugorje.org/overview.htm

Also, the Community of Caritas maintains an excellent website on information about Our Lady of Medjugorje. Here are some links for consideration:

The Miracle of the Sun witnessed by thousands in Medjugorje on August 2, 2009
http://www.medjugorje.com/medjugorje-today/headlines/670-august-2-2009-message.html

Also see, Our Lady of Medjugorje – Miracle of the Sun Captured on Video
http://www.medjugorjemiracles.com/2010/09/medjugorje-miracle-of-the-sun-captured-on-video/

BOOK: “MY HEART WILL TRIUMPH”

My name is Mirjana. I’ve experienced visions of the Virgin Mary for more than 35 years. I cannot say it more directly than that.

I understand that it might be difficult to imagine such a thing happening in modern times. Even to some believers, miracles are things of the past. But I doubt that anyone was more shocked than I was when it all began. I did not even know such things could take place, especially in Međugorje, a small village in former Yugoslavia.

You should know that I’ve been tested by doctors and scientists from all over the world, and they all agree on one thing: I am perfectly normal. I even have that in writing.

So, before you question my mental health, with a smile on my face I simply ask: Do you have an official document validating your sanity?

I did not write this to persuade you to believe me. I am just a messenger, and I wish to share my story with the hope that it might bring some comfort to a world in which peace is becoming increasingly scarce.

Saying that my life changed on the afternoon of June 24, 1981 hardly conveys the gravity of what transpired.

Until that day, I lived under the heavy hand of communism and stomached the many aggravations that went along with it, but the worst suffering began after I and five other children experienced something extraordinary.

What we saw radically changed us, our families, and millions of people around the world, but it also provoked the wrath of the Yugoslav regime. Fearing that my testimony was a threat to their rule, the communists declared me an enemy of the state when I was just 16 years old.

Perhaps their fears were warranted, because I had come to know something far greater than the communist government—far greater, in fact, than anything on Earth…

I had come to know God’s love.

I (Maureen) see a Great Flame as I enter my prayer room that I have come to know as the Heart of God the Father. His Voice says:

“I am the Lord of all, the Eternal Now. I am the Creator of all things great and minuscule. I create each life at conception. I create each conscience and the free will each conscience is clothed in. My Dominion is over all of earth – from the depth of the sea to the heights of the greatest mountains. I am He who perpetuates your very existence, yet with all My Majesty and Power I respect the free will I have given every soul. I do not interfere.”

“Today, I touch earth once again through this messenger.* I remind humanity of the Laws I gave so many centuries ago – the Ten Commandments. You cannot improve upon perfection. Obey My Commandments.”

“All of earth – all of mankind cries out for peace and balance. This will not come to you unless you obey My Commandments. When you take life in the womb or support those who do so, the blood is on your hands. You perpetuate the cycle of evil.”

“Accept the grace of My speaking here** today as a loving Father. Move towards My Bosom of Love – not away from it. I am prepared to share great things with you if you choose to obey My Commandments.”

* Maureen Sweeney-Kyle
** The apparition site of Maranatha Spring and Shrine.

For further discernment:
The Father Speaks To His Children
http://www.fatherspeaks.net/index.htm
Church-approved. Revelations of God the Father given to Mother Eugenia Elisabetta Ravasio. Calls for feast day, August 7th, for “Father of All Mankind.” Special icon image of God the Father.